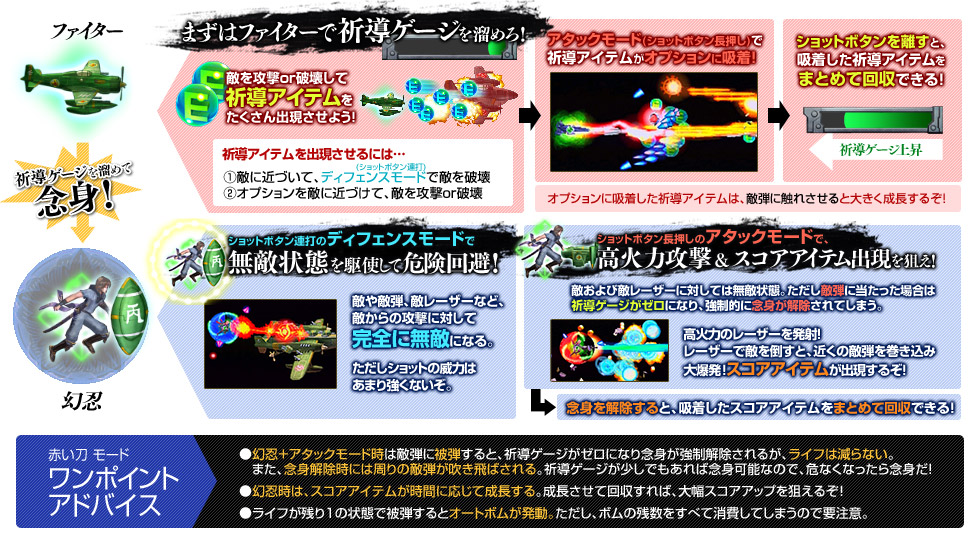 -Removal of the limit on the amount of scoring items on the screen at once.

-The power of the gun when exiting from Nenshin has been reduced.

-The item suck-in range when in Ninja form has been widened.

-The adsorption range of the options in Fighter form has been widened.

-The time for the score items to stay on screen before disappearing has been lengthened.

-When the hit count reaches 256, the items that appear from the enemy bullets are medium score items.

-When you defeat an enemy shooting lasers when you are in Fighter form, those lasers turn into small energy replenishment items.

-Movement speed of Kinsenka (Type A ship) has been increased in Attack mode.

-Movement speed of Kochouran (Type B ship) has been increased in Attack mode.

-Movement speed of Yaezakura (Type C ship) has been increased in Defense mode.

-For Kochouran and Yaezakura, when in Fighter form, the amount of
energy replenishment items produced when their options embed into an
enemy has increased.

-The timing of the appearance of energy replenishment items from the options shooting in Fighter form has been changed.

-Laser damage when in fighter form has been doubled.

-For Kinsenka, when exiting from Nenshin, the time it takes for the options to return to default formation has decreased.

-For Yaezakura, when exiting from Nenshin, the time it takes for the options to return to default formation has increased.

-The amount of energy replenishment items produced when an enemy is defeated has been increased.

-The amount of suicide bullets produced when in defense mode in Ninja form has increased.

-When in Ninja form, the amount of score items produced from medium-sized enemies has increased.